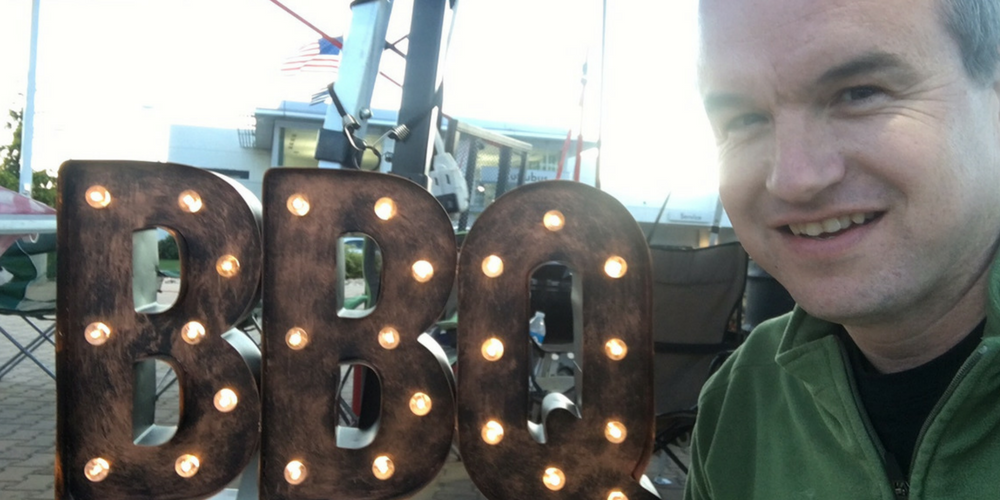 In this episode we chat with Chef Jeff David From Salt lake City Utah. Chef Jeff  cooks with the competitive cook team Smoke Ain’t No Joke in Utah. He has a cooking passion second to none. He once had a cooking gig so large that the grease from his cook started a huge fire that brought the fire department to his backyard. Chef Jeff also love to cook that spicy Cajun food,YUM.

In 2009 I decided that I really wanted to re-ignite my love of cooking. It had been a decade since I had returned from the Philippines—the place where I fell in love with food. I registered for cooking classes at Sur La Table & in 2010, found the “Fine Art of Cooking” series at Orson Gygi taught by Chef Shawn Bucher. This course taught me the fundamentals of cooking. It’s not a “follow this recipe” class but a foundation on how to be a fabulous cook. I am not a great recipe follower so this really fit. I have since taken other classes, gleaned any knowledge I can along the way and have done a great deal of my own experimenting.

Some of those additional classes that I took were grilling and BBQ. It was more of a basic introduction but it lit a spark within me. In June, 2012, my wife bought m

e a smoker for my birthday. It was time to be thrown into the fire—literally and figuratively. My In-Laws had given me some beef ribs. I knew nothing other than to put them on the smoker and guess when they were done. I did figure out when they were done, and they were absolutely awful; there are few times in my life where I have tasted meat that bad. Oh how humility can help us grow.

I joined some online forums and somehow connected with KCBS—Kansas City Barbeque Society. They were having a competition and judging class in Mesquite, NV—only 330 miles from my home. I signed up and headed South. That four hour class was amazing. The irony was not lost on me however that I was now certified to judge items which I had never cooked myself.

Then I began cooking BBQ and began cooking it often. There were ribs, pork, brisket, chicken, turkeys. I was quickly becoming the chef for all family gathering, friend reunions, neighborhood block parties, church activities, holidays, and the like. It was fun, it was busy.

In 2014, I was able to connect with Rub Bagby of Swamp Boys BBQ in Winter Haven, FL. Rub has quite the BBQ resume and is a Grand Champion from the Jack Daniels Invitational. He came to Salt Lake City to compete, and to teach a class. I never knew how awesome meat could be until I took that two-day intensive.

I find it interesting how someone, such as myself, with an A-Type personality, can be drawn and excel at cooking meats that can take up to 12 hours. It is the process that I love as food is my art.

2016 was a busy year and a lot of “life” happened. I didn’t BBQ much and honestly felt stagnant. In early 2017, I made the decision to be more proactive; I had to take things to the next level. That is when I made my BBQ Heave of Desperation.

The “heave of desperation” that I mentioned was placing the following ad on the Utah BBQ Association’s Facebook Page: “I’m looking to work with a BBQ team to help in anyway that I can. I have been doing backyard BBQ for 5 years now and want to take things to the next level. Will work long hours for little or no pay.”

In a Cajun Kitchen

And finally, don’t forget to click below and subscribe to the show on iTunes to get automatic updates.